LAZMET NOAVEK, MY FATHER and former tyrant of Shotet, had been presumed dead for over ten seasons. We had held a funeral for him on the first sojourn after his passing, sent his old armor into space, because there was no body.

And yet my brother, Ryzek, imprisoned in the belly of this transport ship, had said, Lazmet is still alive.

My mother had called my father “Laz,” sometimes. No one else would have dared but Ylira Noavek. “Laz,” she would say, “let it go.” And he obeyed her, as long as she didn’t command him too often. He respected her, though he respected no one else, not even his own friends.

With her he had some softness, but with everyone else . . . well.

My brother—who had begun his life soft, and only later hardened into someone who would torture his own sister—had learned to cut out a person’s eye from Lazmet. And how to store it, too, in a preservative, so it wouldn’t rot. Before I truly understood what the jars in the Weapons Hall contained, I had gone there to look at them, on shelves high above my head, glinting in the low light. Green and brown and gray irises, afloat, like fish bobbing to the surface of a tank for food. 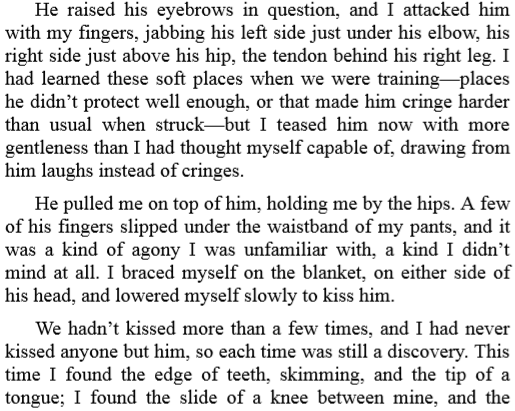 My father had never carved a piece of someone with his own hands. Nor had he ordered someone else to do it. He had used his currentgift to control their bodies, to force them to do it to themselves.

Death is not the only punishment you can give a person. You can also give them nightmares.

When Akos Kereseth came to find me, later, it was on the nav deck of the small transport ship that carried us away from my home planet, where my people, the Shotet, now stood on the verge of war with Akos’s home nation of Thuvhe. I sat in the captain’s chair, swiveling back and forth to soothe myself. I meant to tell him what Ryzek had told me, that my father—if he was my father, if Ryzek was even my brother—was alive. Ryzek seemed certain that he and I didn’t actually share blood, that I was not truly a Noavek. That was why, he had said, I hadn’t been able to open the gene lock that kept his rooms secure, why I hadn’t been able to assassinate him the first time I tried.

But I didn’t know how to begin. With the death of my father? With the body we had never found? With the niggling feeling that Ryzek and I were too dissimilar in features to have ever been related?

Akos didn’t seem to want to talk, either. He spread a blanket he had found somewhere in the ship on the ground between the captain’s chair and the wall, and we lay on top of it, side by side, staring out at nothingness. Currentshadows—my lively, painful ability—wrapped around my arms like black string, sending a deep ache all the way down to my fingertips.

I was not afraid of emptiness. It made me feel small. Barely worth a first glance, let alone a second. And there was comfort in that, because so often I worried that I was capable of causing too much damage. At least, if I was small and kept to myself, I wouldn’t do any more harm. I wanted only what was within arm’s reach.

Akos’s index finger hooked around my pinkie. The shadows disappeared as his currentgift countered mine.

Yes, what was within arm’s reach was definitely enough for me.

I turned my head toward him. He was still looking up at the window, a faint smile curling his lips. Freckles dotted his nose, and one of his eyelids, right near the lash line. I hesitated with my hand just lifted off the blanket, wanting to touch him but also wanting to stay in the wanting for a moment. Then I followed the line of his eyebrow across his face with a fingertip.

“This is a request, not a command. A humble one,” he said. “Just say my full name, maybe?”

I laughed. “Most of your name is Shotet, remember?”

“Right.” He lunged at my hand with his mouth, snapping his teeth together. It startled a laugh from me. “What was hardest for you to say, when you were first learning?”

“Your city names, what a mouthful,” I said as he let go of one of my hands to catch the other, holding me by pinkie and thumb with all his fingertips. He pressed a kiss to the center of my palm, where the skin was callused from holding currentblades. Strange, that something so simple, given to a hardened part of me, could suffuse me so completely, bringing life to every nerve.

“Fine, I’ll say them. Hessa, Shissa, Osoc,” I said. “There was a chancellor who called Hessa the very heart of Thuvhe. Her surname was Kereseth.”

“The only Kereseth chancellor in Thuvhesit history,” Akos said, bringing my palm to his cheek. I propped myself up on one elbow to lean over him, my hair slipping forward to frame both our faces, long on one side though I was now silverskinned on the other. “I do know that much.” 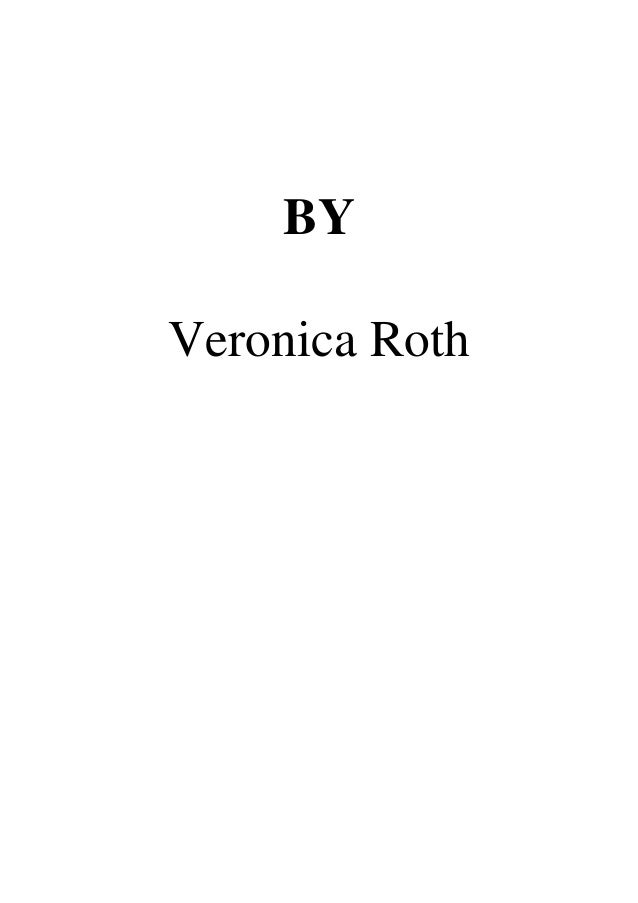 “For a long time, there were only two fated families on Thuvhe,” I said, “and yet, aside from that one exception, the leadership has only ever been with the Benesits, when the fates have named a chancellor at all. Is that not strange to you?” 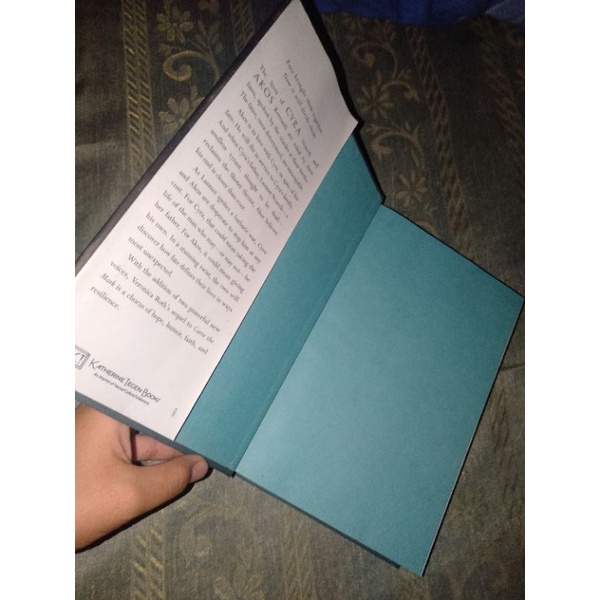 “Maybe we aren’t any good at leading.”

“Maybe fate favors you,” I said. “Maybe thrones are curses.”

“Fate doesn’t favor me,” he said gently, so gently I almost didn’t realize what he meant. His fate—the third child of the family Kereseth will die in service to the family Noavek—was to betray his home for my family, in serving us, and to die. How could anyone see that as anything but a hardship?

“Cyra,” he said. Then he paused, frowning at me. “Did you just apologize?”

“I do know the words,” I replied, scowling back. “I’m not completely without manners.”

He laughed. “I know the Essanderae word for ‘garbage’; that doesn’t mean I sound right saying it.” 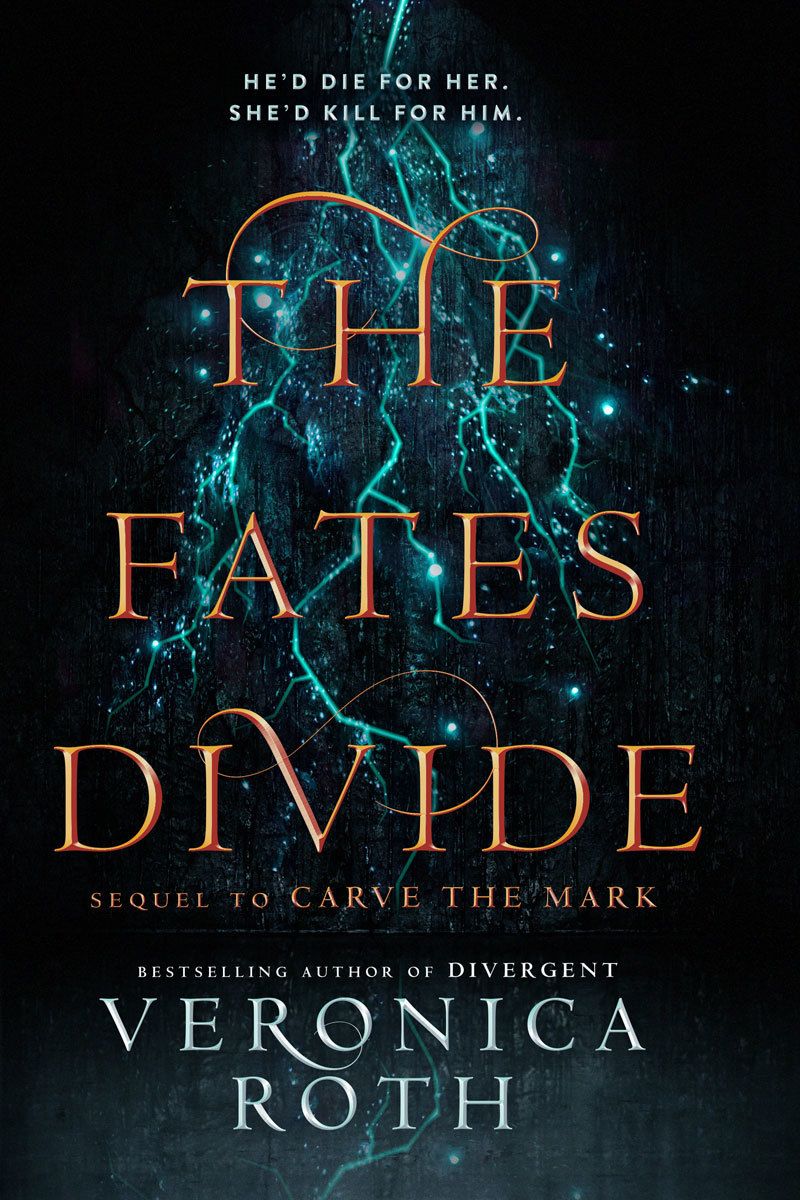 “Fine, I revoke my apology.” I flicked his nose, hard, and when he cringed away, still laughing, I said, “What’s the Essanderae word for ‘garbage’?”

He said it. It sounded like a word reflected in a mirror, said once forward and once backward.

“I’ve found your weakness,” he said. “I just have to taunt you with knowledge you don’t have, and you’re distracted immediately.”

I considered that. “I guess you’re allowed to know one of my weaknesses . . . considering you have so many to exploit.”

He raised his eyebrows in question, and I attacked him with my fingers, jabbing his left side just under his elbow, his right side just above his hip, the tendon behind his right leg. I had learned these soft places when we were training—places he didn’t protect well enough, or that made him cringe harder than usual when struck—but I teased him now with more gentleness than I had thought myself capable of, drawing from him laughs instead of cringes.

He pulled me on top of him, holding me by the hips. A few of his fingers slipped under the waistband of my pants, and it was a kind of agony I was unfamiliar with, a kind I didn’t mind at all. I braced myself on the blanket, on either side of his head, and lowered myself slowly to kiss him.

We hadn’t kissed more than a few times, and I had never kissed anyone but him, so each time was still a discovery. This time I found the edge of teeth, skimming, and the tip of a tongue; I found the slide of a knee between mine, and the weight of a hand at the back of my neck, urging me closer, further, faster. I didn’t breathe, didn’t want to take the time, and so I ended up gasping against the side of his neck before long, making him laugh.

I couldn’t keep myself from smiling. Lazmet—and whatever questions I had about my parentage—didn’t feel as close to me now. I was safe here, floating on a ship in the middle of nowhere, with Akos Kereseth.

And then: a scream, from somewhere deep in the ship. It sounded like Akos’s sister, Cisi.